The reclining figure on the lid is male. In appearance, he is youthful and idealised: this impression is also enhanced by the long, curly hair, reminiscent of Alexander the Great. There is a painted band around his hair and he is clad in a chiton and himation which is rendered plastically. His right hand is holding a phiale mesomphalos, and the left is holding the fold of the himation and is supported by a thick cushion. The tip of the right foot with his bare toes can be seen on the left narrow side. The urn with the mould-made relief shows the moment in the fight between Eteocles and Polyneikes when the Theban brothers give each other the death-blow.

The relief is framed by architectural elements, which are, however, overlapped by the figures. On either side, in the role of vigilant, almost protective seconds, is a winged female infernal demon, each wearing a short chiton, whose upper part is draped round the waist; the upper part of the body has cross-bands and the arms are covered with loose cloth sleeves. Both are also wearing short boots and carrying torches. The warrior on the left looks like emerging from the combat as the winner: his armour is still in fact as he thrusts his sword into his opponent’s throat. The warrior on the right has fallen to his knees and lost his helmet, which is now lying between the other man’s feet and his opponent has driven his shield aside. Even so, the kneeling man succeeds in thrusting his weapon deep into the other’s stomach. The weapons have penetrated so deeply into the bodies that they cannot be seen at all.

The presentation is assembled from different, commonly used poses, borrowed from battle scenes in the Late Classical and Hellenistic art. The scene first appeared on fine alabaster urns, but became extremely popular on mould-made urns. Once the composition was finished and the mould cast, a vast number of replicas were possible; it was even possible to make the casts and moulds from existing urns. Depending on how many steps there had been between the original mould and the ciues, and how much the clay had shrunk during firing, the sharpness and size of the urn varied. Several hundred such urns had survived – the Glyptotek has three – and it was precisely this motif which was the most popular in Chiusi and its territory. To judge from its lid-figure, this urn belongs to the period around 150-130 BC, but the urn type remained in use for a long time, in smaller and smaller editions, and with the details increasingly indistinct. The rationalised work procedures in the manufacture of cast urns certainly led to very reasonable prices, which, in turn, raised the number of potential customers considerably.

There is damage to this particular urn. The lid-figure’s head is broken off at the head, but at some point has been reattached. The lid is hand-modelled; it is hollow, with the underside closed by a slab of clay. To prevent damage during firing, the lid is provided with air-holes under the right arm, in the body under the left arm, and under the folds of the cloak. Even so a crack occurred along the edge-fold of the cloak on the rear side. The clay on the lift is red-brown, that of the casket is from red-brown to beige. The lid was covered with cream-coloured slip before being richly painted with different shades of red, white and cream, black and blur. The casket has damage lower down on the right side, but is otherwise well-preserved.

For the typology of the lid-figure, Artigianato artistico, particularly 110 no. 117. 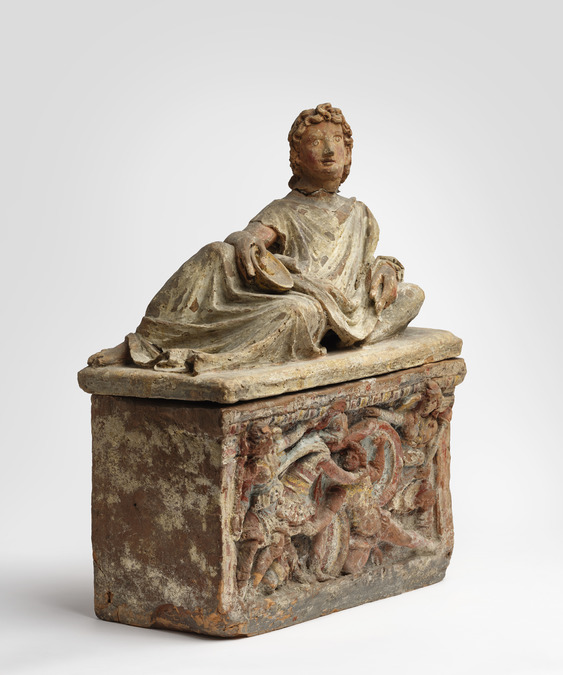