Head of a woman

This female head is the first sculpture in the collection of the Ny Carlsberg Glyptotek to be examined for its polychromy. The investigation revealed small areas with original paint colour on skin and hair. Two cross-sections of the paint layers from the skin show a three-layer structure with a ground layer and top layer containing calcium carbonate and a middle layer containing mainly calcium carbonate and iron (Fe) with hematite as the colouring ingredient. This indicates the use of a light-coloured skin tone. In contrast to the cross-sections taken from the skin the one taken from the hair only shows a single layer structure of a white grain matrix mixed with a variety of small brown, red, black and orange grains suggesting that the hair colour might have been red/brownish. UV- fluorescenc revealed that the eyes had been painted. Prominent fluorescence in the whites of the eyes bears witness to this, although no traces of colour could be found. The general stratigraphy and pigment composition has been established while the binding medium has yet to be.

The head, which comes from a statue is c. 20 m. high or slightly over life-size probably representing a goddess, cf. the wreath. The whole lower part of the head is missing and the rendering of the hair can only be seen at the right temple. Traces of drilled holes in the hair cap show metal fittings, perhaps a wreath, were attached. The left eye has been heavily reworked, and the hair line on the left side has been emphasized.

This fragment of a female head was bought c. 1910 in Athens by the Danish architect Sven Risom and acquired for the Glyptotek in 1940. The marble is probably Parian lychnites. On stylistic grounds, it is unanimously held to be a Classical Greek original, made in Athens c. 425 BCE. The head is related stylistically to a group of other Attic female marble heads and fragments associated with the Parthenon sculptures and sculptures of the immediate post- Parthenonic period. Like the Glyptotek head, a number of these pieces have drill holes in the hair for the attachment of metal ornaments such as diadems and wreaths. This feature and the slightly over life-size format suggest that the head is that of a goddess. Compared to that of the Greek Archaic and Early Classical periods, the sculptural polychromy of the Classical and Late Classical period remains poorly documented. The summary offered by Reuterswärd in 1960 has not been substantially challenged by subsequent research. The results related above have a special bearing on one of the most contested issues, namely how the nude parts of marble sculptures were dealt with. Was a skin colour applied or not? For the Archaic period, the evidence available remains meagre and its interpretation debated. In the light of our present knowledge, it would seem advisable to be very open-minded and avoid generalizations. The decision whether to apply a skin colour or not may have been influenced by factors such as material, monument type, context, formats and regional traditions. As for the Classical period, evidence is even thinner. To date, we have no published study of samples taken from skin colour remaining on Greek marble sculpture of the Classical period. The cross-sections of the skin colour of NCG IN 2830 and the data obtained from them therefore have no parallels with which they might be compared. Consequently, this skin colour may in principle have been applied in post-classical or even post-antique times.

1 A few traces of what is assumed to be skin-coloured paint on the right cheek. 2 A few fragments of skin-coloured paint in the area around the left eye. 3 An area around and below the left ear with skin colour. 4 A number of reddish-brown paint traces identified in the cavities of the hair above the left ear and in other parts of the hair. 5 An area with brown paint identified on top of a putty-like material covering what is assumed to be old damage and subsequent repair at the top of the forehead at the edge of the hairline.

The general condition of the sculpture surface could – based purely on the visual examination – be divided into five fairly distinct levels: 1 A level of what is assumed to be the original, relatively smooth surface of the face where skin colours might have been applied – ‘warm’ greyish appearance; 2 A level of smooth surface of the face around the left eye where the marble surface is considerably whiter. Such surface characteristics are usually interpreted by archaeologists as a later re-working of the surface in order to make damaged areas less conspicuous; 3 Areas of relatively white but fairly rough surface present at protruding areas such as the hair, eyebrows and nose, interpreted as wear and tear on the surface rather than genuine breaks; 4 The obviously damaged areas exhibit a rough break surface and a colour somewhat darker than the supposedly original cheek area. This is the case on most of the hair-area as well as most of the left lower half of the cheek, and the bottom of the head where the break is located between the existing part of the head and the now lost parts, i.e most of the mouth, chin and neck; 5 An area above the forehead and at the hairline, seems to have been damaged and has been filled with a putty-like substance that has been covered with a dark red-brown layer of paint of which traces are still visible.

IR: Infrared Reflectography (IRR) images were captured of relevant areas but on this sculpture the technique did not reveal any information that was not visible in tungsten light or in UV-FL

VIL:VIL was preformed without result

As a result of the visual examination – which confirmed the presence of paint traces – five areas with such traces were selected for further study:

Sampling: Four paint traces were embedded in polyester resin and prepared for paint cross section. Approximately half of each sample was left for subsequent analysis. Sample 1, flesh colour from the right cheek. Sample 2, red-brown colour damaged area at the forehead and hairline presumed to be a secondary surface. Sample 3, flesh colour near left eye. Sample 4, hair above left ear.

SEM/EDAX Sample 1. The BSE picture indicates that a coarse, thick middle layer is bounded by thin, fine-grained layers at the top and the bottom. Elements detected are Na, Mg, P, Si, S, Cl, Ca and Fe. All three layers in Sample 1 consist of calcium carbonate (CaCo3) with a number of grains in the coarse middle layer that are very rich in Ca. The Fe concentration is higher in the coarse middle layer and indicates that red ochre was used as part of the skin colour. Sample 2. The BSE picture reveals the presence of a heavy element in relation to the red colour. Elements detected are Ca, Ba, S, Fe, K, Al, Si, Na and Cl.From the maps of Ba and S it is evident that these two elements are responsible for the compound found in connection with the red layer. The red colour is probably due to red ochre or hematite. The ochre is coating grains of quartz (SiO2) and potassium feldspar (KAlSi3O8). Sample 3. Elements detected are Ca, Mg, Fe, S, Cl, Na, Si, Al and P. The BSE picture shows that a coarse, thick layer is overlaid with by a thinner finer-grained layer. Both layers consist of calicium carbonate with a number of grains in the lower layer that are rich in Ca. Al is present in both layers, probably deriving from clay minerals. Fe, probably as yellow ochre, is responsible for the skin colour. Sample 4. The BSE picture reveals a fairly homogeneous surface. Elements detected are Ca, Mg, Fe, S, Si, Al, K, Na, Cl, P and C. An area in the middle of the sample is much darker, implying a significantly lighter element, identified as charcoal. The orange colour in the sample is attributed to the present of Fe due to ochre. The white matrix is rich in Ca and Mg and consists of calcium carbonate and dolomitic limestone (CaMg(CO3)2 respectively.

FT-IR The results were determined or compared with references mainly from the IRUG database. The main pigments/fillers in all layers of all samples were determined by carbonate bands due to calcium carbonate (CaCo3). The FT-IR analysis showed no traces of binding media: neither proteins, carbon hydrates nor resins. Oil was found partly identified by peaks around 1700 to 1715-20 cm1 and som CH groups around 3000 cm1. These observations were made on Samples 1-3 while hardly any significant tops around 1700 were found in sample 4.

Sample 1 and 3. The mid-yellow layer did not show traces of iron oxides or silicates as expected. Sample 2. Some of the various red grains were shown to contain calicium carbonate while others contained calicum carbonate together with silicates such as feldspar. The red colour appeares to be linked to iron oxides. Bands suggesting sulphates were detected. Sample 4 consisted mainly of calcium carbonates as well but was distinct from the other samples in having a silicate presence. The brownish colour was due to iron oxides, silicates as well as small black carbon particles.

GC-MS GC-MS extended the analysis of organic materials and revealed the presence of fatty acids P (Palmitine and S (stearine) thus indicating oil. No A (azlaine) was found and thus it appears not to have been a non-drying oil. It is uncertain whether the non-drying oil has been applied in recent times or in antiquity.

F. Poulsen (1951), Catalogue of Ancient Sculpture in the Ny Carlsberg Glyptotek, Copenhagen, cat. no. 298a. 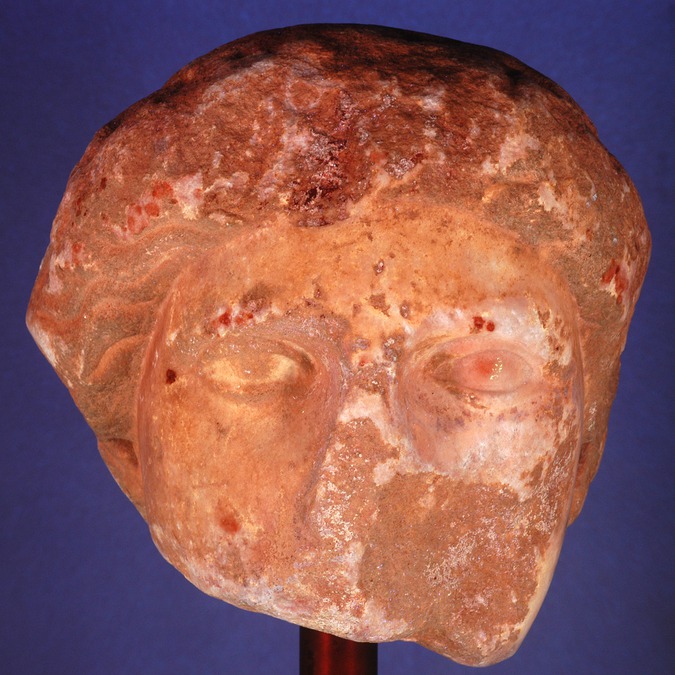