A small piece broke off on the nose and in the hair, otherwise the piece is very much intact.

The neck and hair have been cut obliquely from attachment: this also applies to the back of the head, in which there is a dowel-hole now filled with plaster. Only the small locks over the forehead and the long locks at the sides have been carved with a drill; the rest of the hair at the sides and all of that at the back has been left only coarsely hewn. The face has a very narrow, lined forehead with arched brows, a straight nose, and a small, open mouth. Cheeks, beard, lips eyebrows, and irises are painted red, possibly in preparation for gilding. This head, with its colossal size, may have been part of a cult statue of one of the “father-gods” Zeus or Poseidon, probably depicted sitting down. The head is strongly reminiscent of the Zeus of Otricoli in the Vatican which is known in many examples and which is thought to have been inspired by an original statue from the fourth century BC. close in style to the famous statue of Serapis by Bryaxis in Alexandria.

Fregellae was a Latin colony bordering on the Samnite country: established in 328 BC., it was destroyed by the Romans in 125 BC, after which a new Roman colony, Fabrateria Nova, was founded. The head seen here may have come from the statue of Zeus in the Capitolium of that city, where Zeus was the principal deity. 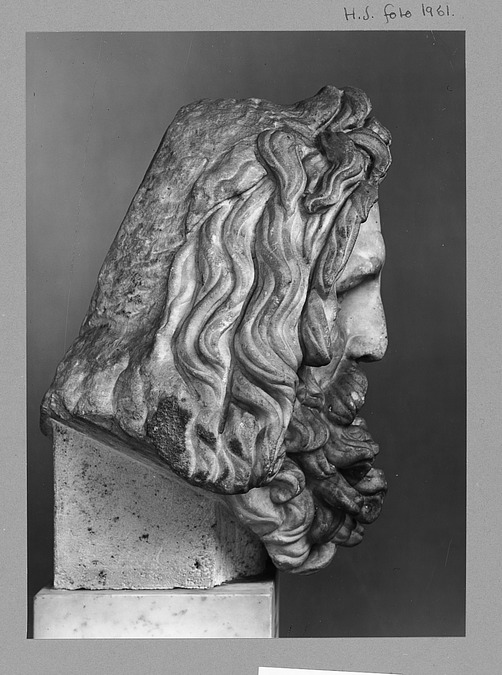