This high-gloss, polished portrait has only briefly been examined. A few red traces are observed on the face while traces of red/orange, brown, red, black, and blue grains are observed on the hair. VIL- imagin shows scattered particles of Egyptian blue on the left eyebrow and on the hair, suggesting that blue was part of the hair’s original colour palette.

The nose has been broken off and is missing. The chin and the ears are damaged. The neck is formed for insertion in a statue. Incrustations are observed in several places on the face but the main amount is concentrated on the hair.

The portrait is of a young man. The hair is short and the individual hairs are represented with a point chisel, creating a hatched, punctuated surface texture. The chisel was also used to accentuate the delicate eyebrows, while the pupils have been drilled. The skin surface is polished to a high gloss resembling porcelain, which is in sharp textural contrast to the chiselled hair.

A few red traces are observed on the face. Along the eyelids are traces of black and scattered grains of red. The hair shows traces of red/orange, brown, red and black grains and in addition, a few relatively large, blue grains.

UV-FL: Fluorescent phenomena related to organic dyes or surface treatments are not observed.

VIL: On the hair and on the left eyebrow an even distribution of particles are observed suggesting that Egyptian blue was part of the hair’s original colour palette. 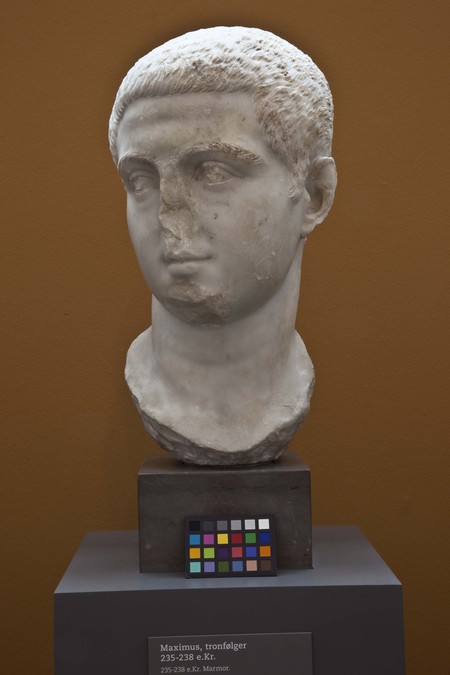