Head of a young Roman

The examination of a Roman portrait, IN 822, in polished white marble, testifies that it was originally fully painted. The hair was originally golden-reddish and yellow, red and blue colours together with black formed the basis of the carnation colour. Traces of original colour in the eye areas provide insight into the ancient painting techniques. Eyelids were delicately painted on a white ground and the rim of the eyes was accentuated using a pink lake. The contour line of the pupil was black, and red, black and blue colours were used for the iris. A compact white layer mixed with red grains was added to conceal the dark areas beneath the eyes.

The portrait is of a young man. The hair is short and the individual strands of hair are represented with a point chisel, creating a hatched , punctuated surface texture. The chisel is also used to accentuate the delicate eyebrows, while the pupils have been drilled twice. The skin surface is polished to a high gloss resembling porcelain, which stands in sharp textural contrast to the chiselled hair.

The portrait has traces of original colouring on both hair and face. The main part is preserved as scattered particles and only in a few instances are cohesive layers found.

Only a few coloured particles are found on skin parts, either incorporated in secondary encrustation or directly on the marble. Besides red colour relatively large amounts of yellow colour are found on the skin together with carbon black and blue.

The hair exhibits the same colour scheme as on the skin with red and yellow mixed black and blue particles. A distinct yellow layer is found on the hair on the back of the head.

Original colour is well preserved in and around the eyes. On a white ground delicate strokes of carbon black form the eyelashes on the left eye. A pink dye is used for the inner corners of the eyes and traces are also observed on the upper lid of the left eye. The white of the eyes was accentuated with a white layer probably mixed with a few blue grains. Carbon black is found in the pupil and the iris has traces of carbon black, red and blue. Beneath the left eye a compact white layer containing large, red grains is observed.

UV-FL: On top of the head and on the forehead an orange fluorescense is observed. Close-up of the eyes reveals a pink fluorescent layer in the inner corners of the eyes and in the upper lid of the left eye. The pink fluorescence is characteristic of an organic lake.

VIL: A few particles shining bright white are observed in the hair, on the skin and in the eyes. The white glow is characteristic of the induced luminescence of Egyptian blue.

The white ground for the carbon black eyelids contains a small amount of lead (Pb, 16 ppm). It is possible that the white layer consists of a lighter element such as calcium.

The white layer with red grains beneath the left eye contains mainly ochre (Fe, 390 ppm) and small amounts of zinc (Zn, 28 ppm) and lead (Pb, 27 ppm). Again it is possible that the white layer is based on calcium. 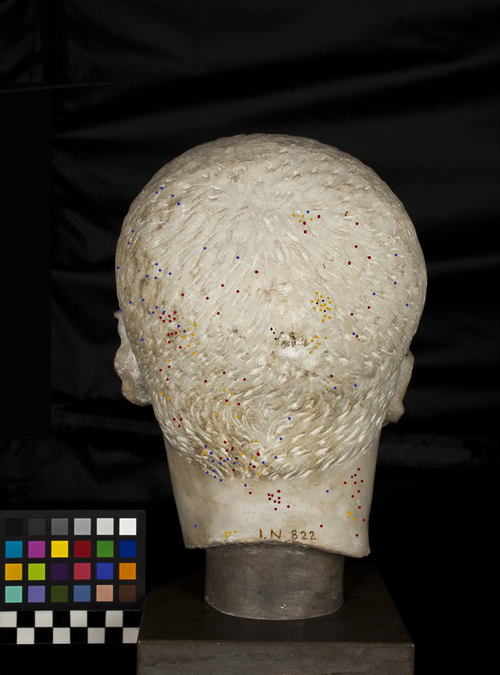