On this archaic, limstone sphinx, well-preserved paint adds to the striking appearance. Clear traces of red ochre are visible to the naked eye on large areas of the sphinx and a few traces of yellow and blue are also found. A small sample was taken for binding media analysis. On the basis of the results of the analyses it is possible to state that the sample contains a saccharide material. It may be hypothesised that the paint binder was a polysaccharide material, such as a plant gum.

The hair is held together by a flat frontlet while the hair above the band and the long mane hair have been rasped smooth, with the probable addition of colours.

Red is found on a large area of the chest, on the front edge of both wings, along the entire underside of both wings, in many areas along the edge between the flight feathers, on the band around the head, on the right side of the hair, between each of the locks of hair, on the right side, under the wing, on the rump, on the underside of the body between the forelegs, on four of the triangular ornaments on the neck, corresponding to every other one of these ornaments and along the bottom edge of the border which marks off the chest from the plumage. Yellow is found on the back of the hair, on one of the feathers on the back of the right wing, below the right eye, on the left shoulder and on the left side of the abdomen. Only a few traces of blue are found on the right shoulder

UV-FL A bright orange is seen in an uneven layer over most of the sculpture, especially on the wing feathers and under the eyes. To what this fluorescence is due has yet to be determined.

VIL VIL- imaging was performed without any result

XRF Several places on the sphinx were examined. All red areas showed a content of iron-oxide based on red ochre.

FT-IR spectroscopy Sample 1 was examined to detect a possible binder. The result did not show any content of protein. However it did show a content of another organic substance which might be wax or oil, probably of recent character due to the tops around 2923 and 2854 Cm-1 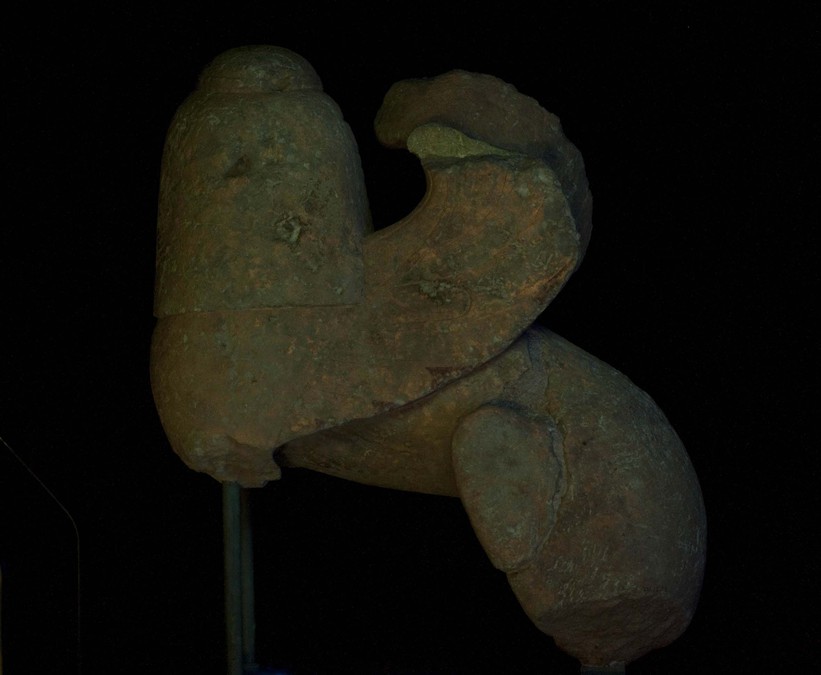