This full-size statue of Kybele has only briefly been examined. Egyptian blue is found on garments while pale pink, probably an organic lake, is found in the folds of the garments. Red is found on skin and XRF measurements reveal a high iron content (Fe) suggesting the use of hematite.

The statue is very well preserved. Damage to the nose and chin. Part of the right cheek and ear have been restored in plaster. A large flake of stone on the right side of the chair has been reattached. The patina on this and another area on the side of the throne suggest that the damage was occasioned in antiquity. Both hands have been broken off at the wrists. All the fingers, each of which was individually attached, are missing.

The sculpture presents a yellowish surface due to the many incrustations and coatings. Attempts have been made to remove the incrustations in several places, resulting in large, visible scratches.

Clearly defined traces of blue are found in several places on the garments and a pale pink is found inside the folds. On the inside of the right arm a fairly large red area is observed

VIL: The blue colour found on the garments has been identified as Egyptian blue by means of VIL and appears as shiny bright white areas

UV-FL A pink fluorescense is observed on the folds of the garments suggesting the use of an organic lake, madder lake.

Cross section:A sample of blue (sample G) was taken from an area from the lower part of the garments. The cross section shows large blue crystals in a white matrix and a single red grain. On top of the blue layer a yellowish substance is visible but is as yet unidentified

XRF:The red colour found on the skin parts of the inside of the right arm was investigated by means of XRF in situ and revealed a high iron content (Fe) suggesting the use of hematite.

FT-IR: was preformed on several samples to detect a possible binder. The result did not show any content of protein or any other organic substance as wax or oil. 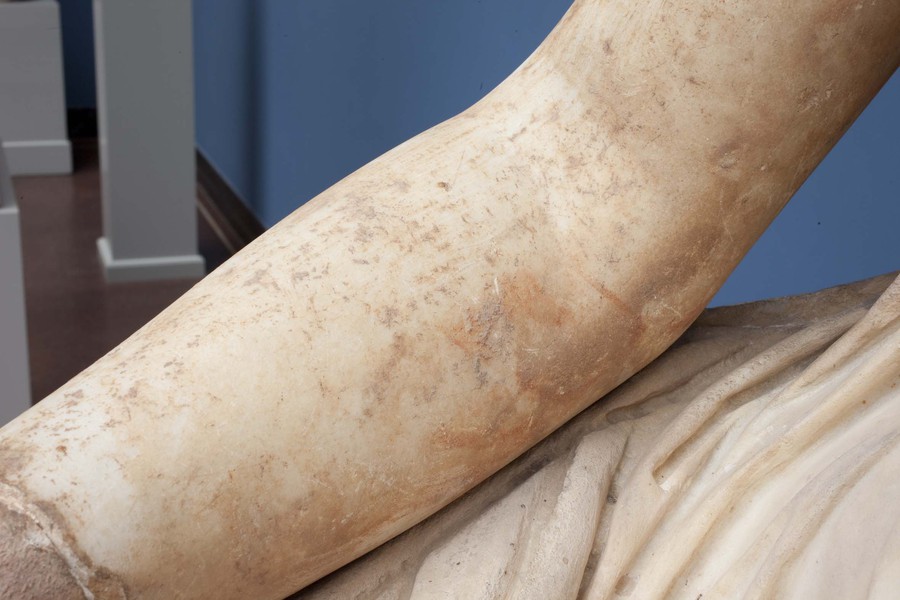