Portrait of a Roman man

The portrait bust is made of white marble. Reddish colour in the hair is still visible to the naked eye. Traces of red colour are also discernible in both eyes, between the lips and in a few places on the skin. VIL- imaging reveals the presence of few particles of Egyptian blue on the back of the neck, in the hair and one particle on the left cheek used to obtain the right tonal variation and a more lifelike appearance.

The bust is well preserved with only a few scratches.

Frederik Poulsen noted in his catalogue from 1951, that the visible traces of colour were also discernible in the eyes (Poulsen, 1951).

Around the hair, the portrait wears a garland. This might indicate that the head is a portrait of an actor or an orator.

Reddish colour is found in the hair mainly on the bangs, the right side of the head and the top of the head. The colour is preserved as a transparent layer. In both eyes small traces of red are present especially in the area of iris, upper rim and in the right lacrimal canaliculus. A pale red is observed between the lips. On the skin a few traces of red are found.On the left cheek the traces appear darker than elsewhere. Minute traces of red are also found on the petals above the right ear.

UV-FL: The portrait reveals no fluorescence phenomena related to the antique polychromy, organic lakes or resins. However, a strong white fluorescence appears in the left eye due to modern treatment.

VIL: The presence of luminescent particles indicates the use of Egyptian blue and is primarily seen as small single particles on the back of the neck, on the hair and on the left cheek.

In 1997 a marble sample was extracted to establish the provenance. 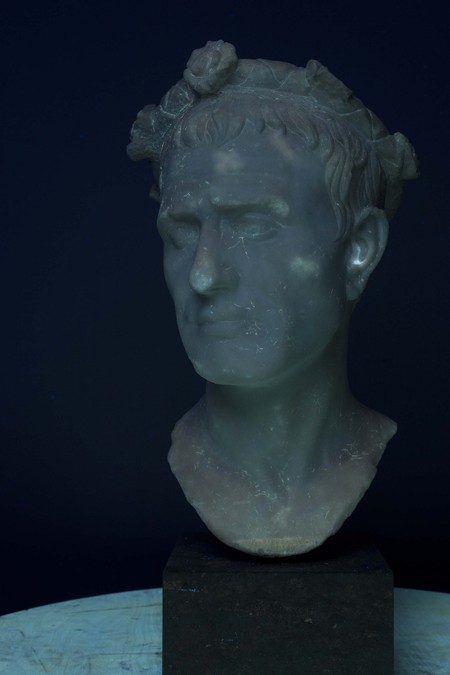