On this fine example of a early Classical, Etruscan antefix the well-preserved paint adds to the striking appearance. The investigation carried out on the polychromy gives a unique opportunity to gain knowledge and valuable insight into the choices in painting techniques on architectural terracottas. The palmette leaves are painted dusky red and black, surrounded by a pale brown. The background between the flowers is bluish-black while the area below the white volutes is painted light blue. The hair is painted red on top of a black layer as are part of the beard and the moustache. Eyebrows, eyelids and irises are painted black. The skin appears brown but a closer inspection of the cross section reveals two layers besides a white grounding layer. This includes the use of black, yellow, red and blue grains on the top layer and a thin fine-grained yellow layer underneath. The VIL-image reveals the extensive luminescent property of Egyptian blue in several locations, for example in the face and on the backround between the flowers.

The antefix represents a silenus head surrounded by a large, deeply concave shell frame decorated with an open-worked pattern of five upright, seven-leaf palmettes alternating with four upright lotus flowers in relief. It has been restored from several fragments with chipping along the breaks. The top and right half of the shell frame are missing. Small fragments missing from the ears and the bottom border.

The silenus head antefixes alternated on the eaves of a temple roof. Model made.

The colour of the individual red palmette leaves is produced by the superposition of three layers. The initial layer is a light brown and in the cental area of each leaf this is covered with a second layer of yellow ochre with a top layer of terracotta red, alternating with black-bluish on every other palmette leaf. The background between the flowers is bluish-black while the area below the white volutes is painted light blue. The brown skin colour has peeled off in some areas leaving the yellow ochre layer visible underneath.On the lower cheek where the beard begins, it is apparent that there was originally a roughly 5 mm wide band where black colour was applied on top of the yellow ochre to define the edge, though much of the black has subsequently flaked off. While the colour of the beard is black, the moustache and the area directly under the mouth have red superposed on the black thereby achieving a deeper, richer vermilion shade. This approach also seems to have been used with the hair on the head, and in addition on the locks from the back of the head.

UV-FL: The few cracks and breaks have been repaired and the UV image clearly visualizes these repairs. A bluish fluorescence appears on the shell frame in the areas painted bluish-black

VIL: The VIL-image reveals the luminescent property of Egyptian blue on the face as scattered particles against the backround between the flowers corresponding to the black areas and on the areas painted blue below the volutes

A sampling strategy is developed on the basis of the preliminary investigation. four samples are taken with a surface area of circa 0.25-1 mm2.

Another cross-section from sample 3 taken from a lock of hair shows a very thin layer of red (less than 20 μm) on top of a black layer making the black visible through the red. The third layer is the white preparation layer.

Micro Probe analysis (EMPA) The samples are carbon coated and prepared for EMPA. The EMP-analysis shows the presence of silicate-based, typical clay minerals in the white preparation layer including quartz grains, silicate, feldspar, iron, aluminium, magnesium and calcium. No evidence of the use of kaolin is found in the white ground.

The top layer of sample 3 is a very, fine, thin a red iron-oxide layer probably hematite on top of a layer of black manganese (MnO2)

Sample 1 from the skin colour shows a ground mixture of hematite and goethite and some unidentified black grains probably carbon in the top layer while the second layer is a thin layer of goethite. 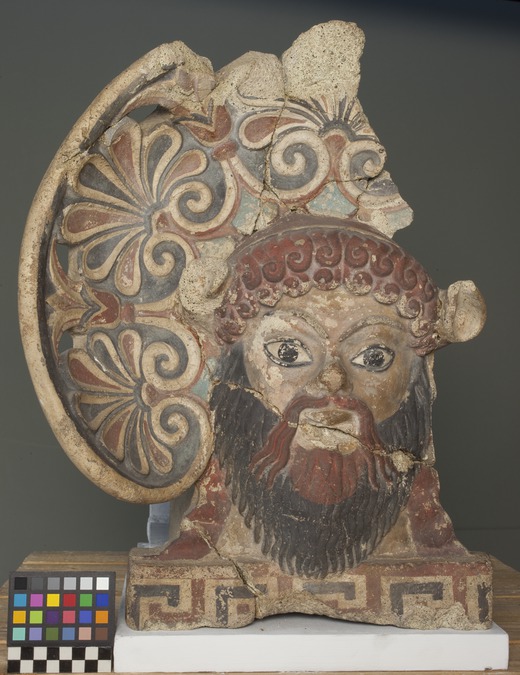